Holden Caulfield (born circa 1934) is a teenager from New York who narrates the events in The Catcher in the Rye.

Holden is the second child of Mr. and Mrs. Caulfield. He has an older brother named D.B., a war veteran turned writer; a younger brother named Allie, who died of leukemia at age 11; and the youngest Phoebe, who is six years younger than Holden. Holden mentions that their parents have different religions, thus he and his siblings are "sort of atheists".[1] He generally describes his childhood as "lousy".[2]

Before attending Pencey Preparatory School, Holden either quit or was expelled from three other schools, including Elkton Hills and Whooton School.[2]

During his final year at Pencey, Holden is 6'2'' tall and has gray hairs visible on his crew cut.[3] When the prostitute Sunny was describing Holden, she likened his appearance to the child actor Freddie Bartholomew.

As one of the most enduring characters in American literature, Holden has become a modern icon of coming-of-age stories and teenage rebellion, and is perhaps most recognized by the red hunting cap he wears. 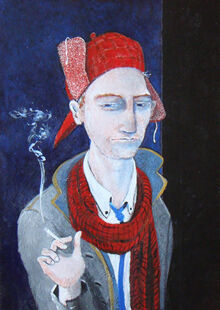 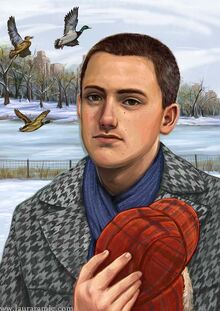 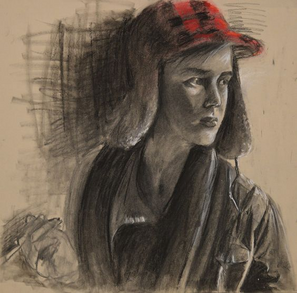 Unknown artist
Add a photo to this gallery

Retrieved from "https://catcher-in-the-rye.fandom.com/wiki/Holden_Caulfield?oldid=4931"
Community content is available under CC-BY-SA unless otherwise noted.